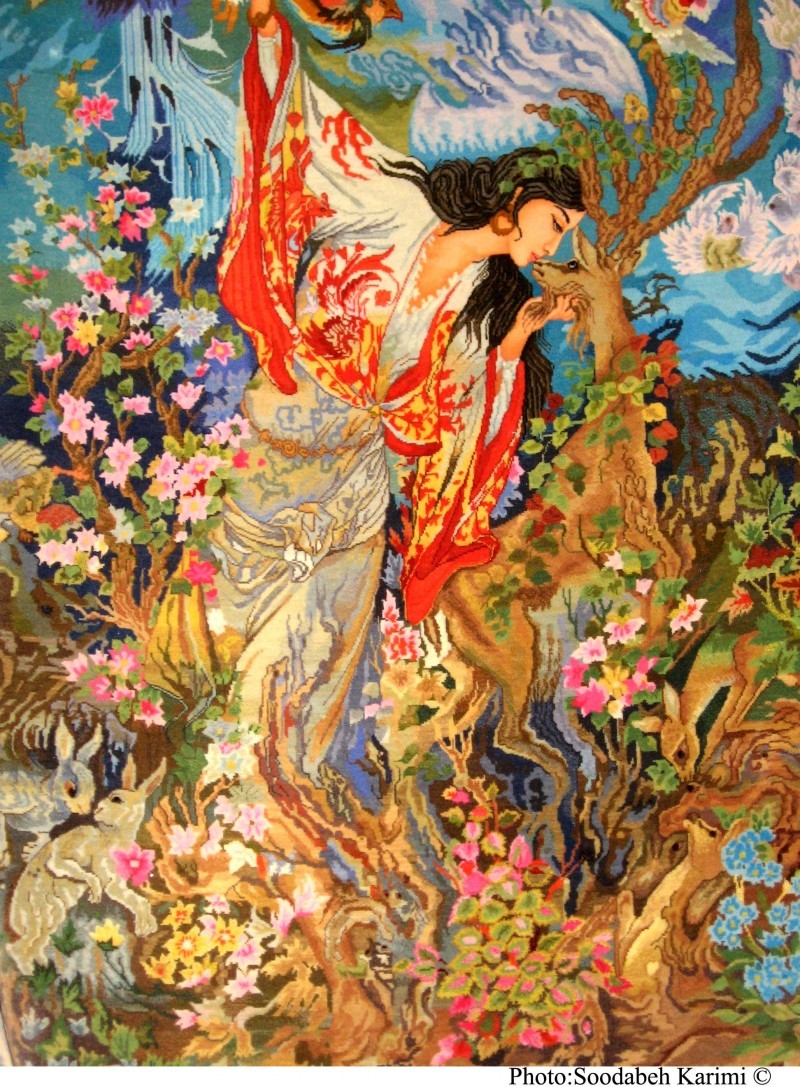 Previous Next
← previous day next day →

Posted by Soodabeh (Yazd, Iran) on 6 June 2007 in Lifestyle & Culture and Portfolio.

The Persian carpet (Pahlavi bōb, Persian farš فرش, meaning "to spread" and Arabic qāli, Turkish hali) is an essential part of Persian art and culture. Carpet-weaving is undoubtedly one of the most distinguished manifestations of Persian culture and art, and dates back to the Ancient Persia (c.3,500 BCE).

The art of carpet weaving existed in Iran in ancient times, according to evidences and in the opinion of scientists, the 500 BCE. Pazyric carpet dating back to the Achaemenid period.

This art underwent many changes in various eras of the Iranian history to an extent that it passed an upward trend before the Islamic era until the Mongols invasion of Iran. After the invasion, the art began to grow again during the reign of the Mongol dynasties of Timurid and Ilkhanid.

With the passage of time, the materials used in carpets, including wool and cotton, decay. Therefore archaeologists are rarely able to make any particularly useful discoveries during archaeological excavations. What has remained from early times as evidence of carpet-weaving is nothing more than a few pieces of worn-out carpets. Such fragments do not help very much in recognizing the carpet-weaving characteristics of pre-Seljuk period (13th and 14th centuries CE) in Persia.

Although carpet production is now mostly mechanized, traditional hand woven carpets are still widely found all around the world, and usually have higher prices than their machine woven counterparts.

Many fine pieces of the Persian carpet are to be found in The Carpet Museum of Iran in Tehran.

Wool is the most common material for carpets but cotton is frequently used for the foundation of city and workshop carpets. Silk carpets date back to at least the sixteenth century in Sabzavar and the Seventeenth century in Kashan and Yazd. Silk carpets are less common than wool carpets since silk is more expensive and less durable; they tend to increase in value with age. Due to their rarity, value and lack of durability, silk carpets are often displayed on the wall like tapestries rather than being used as floor coverings.

All Silk carpets you see in this series are hand woven, framed and brought to show and market in Yazd 2nd Handicrafts Exhibition.

These aren't old carpets but valuable ones because of silk and herbal dyed materials.

This carpet is woven from a famous miniature of Mahmoud Farshchian. The title of this miniature is Growth.

A Persian miniature is a small painting, whether a book illustration or a separate work of art intended to be kept in an album of such works. The techniques are broadly comparable to the Western and Byzantine traditions of miniatures in illuminated manuscripts, which probably had an influence on the origins of the Persian tradition.

live and lovely colors and a great miniature. It's really absorbing that you try to introduce the Iran's culture with your photos, I really apreciate your efforts.

@hamidreza: I'm so happy you liked this one. My first goal in this blog is to show persian culture and introduce our country to people all around the world. Thanks for visit and kind comment.

@mohammad: Thanks Mohammad! You are right!!

This miniature is one of my favorites and when it comes to carpets it even looks nicer. Thank you for sharing these with us Soodabeh!

@Reza: Me myself like this one better! Thanks Reza!

Thank for this information. Nicely captured

This has the best frame in the series so far in my opinion.

@Behrooz: Your opinion is always one of the best ones on my photos! I appreciat your visit and comment Behrooz.